“I’ve never canceled a subscription to a newspaper because of bad cartoons or editorials. If that were the case, I wouldn’t have any newspapers or magazines to read.” -Richard M. Nixon
Sometimes candidates for office come up with new and creative ideas to spread their message, attract voters, and raise money. Howard Dean pushed grassroots fundraising (lots of people donating small amounts of money). Harry Truman had the first major political TV ad. Recently, some candidates have been drawing cartoons to easily promote their message.

Brent Rinehart is running for reelection as Oklahoma County Commissioner. Aside from having the worst website ever (this URL now redirects to the It Get’s Better Project), he also has the artistic skills of a 6 year old with Down Syndrome. Thought really I shouldn’t judge, I’ve got the artistic skills of Terry Schiavo circa 1990 – 2005.

He drew this cartoon:

(Just an exceprt. You should really read the whole thing.)

I’m not sure what his motivation was. Humiliate his children maybe? Demonstrate the quality of the art classes in Oklahoma public schools?

He defends his comic book on American Morning on CNN.

During the interview, John Roberts asks Mr. Rinehart if he is homophobic, Rinehart responds:

“Well, I’m not even sure as to what homophobic means. But let’s just keep in mind that we are in a cultural war, not just here in the state of Oklahoma but nationwide. And I have seen pictures and I’ve seen viewings of gay pride parades around the nation here in the state of Oklahoma, and that’s the very same attire and the very same billboards that you see in these parades.”

He goes on to say:

“So the thing about it is, when you’re putting out a message and it lands on particular people’s feet and they don’t necessarily like the message, that doesn’t mean that the message isn’t true.”

Sean Tevis is running for Kansas State Representative. His website, despite sorta staring off into space in the photo on the front, at least looks like it was designed by a professional in the last decade. Mr. Tevis also decided to draw a cartoon. 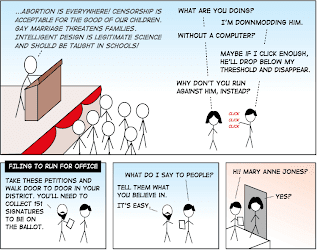 (Again, just an except. You should read the whole thing.)

Instead of having to defend said cartoon, NPR does a story about how successful his cartoon has been.

So kiddies, if you’re ever running for office and decided to create a cartoon to spread your message, try to have some artistic ability. Or just not being a doosh might be enough.