“My idea of feminism is self-determination, and it’s very open-ended: every woman has the right to become herself, and do whatever she needs to do.” –Ani Difranco

French President Nicolas Sarkozy has addressed French parliament and announced that the burqa will be banned. He said,

“It will not be welcome on French soil. We cannot accept, in our country, women imprisoned behind a mesh, cut off from society, deprived of all identity. That is not the French republic’s idea of women’s dignity.” 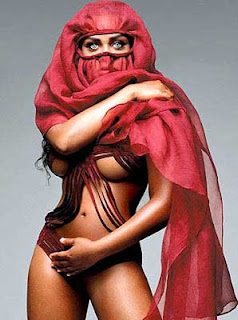 I realize that Sarkozy thinks he is helping women. But so did the doctors who claimed PMS was all in our heads. So did the men who claimed we couldn’t participate in politics because we were too fragile.

Sarkozy appears to think that all women who are wearing the burqa are being forced to by oppressive fathers or husbands. Perhaps this is true. If it is, then all Sarkozy as done is force these women to remain in the home. No oppressive dooshbag who forces his wife/daughter to wear a burqa against her will is going to say “Hey it’s cool for you to go out without it if the French president says you can’t wear it.” He’s going to tell them to keep their asses at home, period. Banning the burqa does nothing for women who are trapped in oppressive environments; it simply cuts off their access to the world.

My real problem with this proclamation is its misogyny. Sarkozy assumes he knows the situations of all women within France and that none of them could ever choose to wear this garment. How does Sarkozy or the French republic or any man or woman think that they know what is best for a woman?

And where does it stop? Is he going to suggest banning long skirts and long sleeved shirts that observant Jews and Christians sometimes wear?

I have a novel idea. Let’s let women fucking decide what they want to wear. The French government can (and should) make French women aware of what their rights are. The government can provide resources to anyone living in a harmful environment, so they can leave or alter that environment. But let’s leave restrictive dress codes to the people who are really good at it, the Catholics.