“Marriage is like life – it is a field of battle, not a bed of roses.” –Robert Louis Stevenson 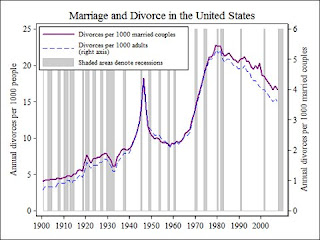 Freakonomics has an interesting article about divorce and the business cycle. According to their data, divorce does not increase during economic downturns.

To me, this makes sense. Divorce is expensive, and not just the legal fees. A group of people who were paying for rent/mortgage/upkeep on one house must now fund two. Double the furniture. Increase in driving costs associated with shuttling kids back and forth (assuming kids exist in this marriage). Tons of other expenses.

Further, if I’m a stay at home mom/housewife and I’m considering getting divorced, that would mean I would now have to join the workforce to support myself. Assuming I’m a rational actor, I’m going to look at this shitty economy and say “I can hang out here for another year or two while the economy picks back up” (this, of course, assumes my husband isn’t a crazed psychopath or something).

I wonder why divorce declined in the 1960’s and has been declining since the 1980’s. Could it be that during times of increased conservatism, more people find marriage “morally” appealing? However, morally appealing doesn’t withstand the test of time and when the conservative “glue” disappears, so does marriage?