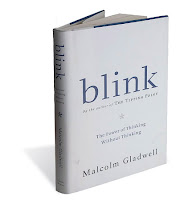 Blink essentially takes a bunch of scientific research that is incomprehensible to the layman reader and makes it accessible. In fact, several reviews of the book note, in a seemingly negative way, that his work isn’t original. I never got the impression that Gladwell was rocking a lab coat and conducting experiments. Most of his work, it seems to me, is about taking interesting topics that are inaccessible to the average reader and making them fun and interesting.

Anyway, the moral of Gladwell’s story here is that snap judgments are better than well thought out ones. It’s an odd conclusion frankly. I always felt like I’m better off when thinking things through than the immediate judgment call.

However, the more I examined myself, the more I feel that Gladwell may have a point. (Ironic, though, that I had to think about it to conclude that.) I don’t make good snap decisions when I’m upset or angry or tired. I do make good snap decisions when I’m not. And my first instincts about things, from a situation to a person, are usually right. If something rubs me the wrong way about someone initially, I’ll often later discover that they are a doosh.

I found his discussion of John Gottman’s work especially interesting. Gottman can observe a couple and predict, with 90% accuracy, what couples will divorce in 4 to 6 years. It’s fascinating stuff. Gottman’s work is also featured in the TV show Lie To Me, which I really enjoy.

And to me, that is what Gladwell’s books are about. I’ve spent hours on Wikipedia as a result of his books and I’ve learned tons about the examples he has used in them. Another utterly fascinating work.