“The more people I meet the more I like my dog.” -Unknown

This dog food shit is awful. To be honest, it’s the disgusting. It’s so freaking gross. After I make it, I take a shower to “wash the murder off.” I’m not even totally opposed to eating meat and I’m so icked out. It stinks. It’s ugly. It looks like pig vomit. 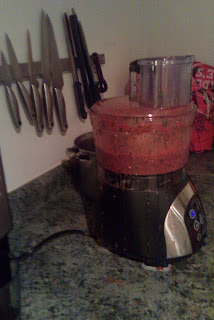 All that being said, the dog is LOVING the new food. He has had no GI issues since I started this process. His coat looks shinier. And he’s fucking bonkers for his new food.

The first batch (ten days worth of food) I did in a 1 and 1/2 cup food processor. Yeah, that was a mistake. It took approximately 467 years to process like 15 lbs of food. I knew if I wanted to keep this up, I was going to need a bigger food processor. Fortunately, I had a gift card to WalMart. As much as I loath that store, I sucked it up and went off in search of the biggest fucking food processor fifty bucks could get me. I found an awesome GE model which holds 14 cups. It’s a beast. 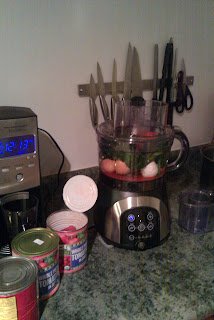 After I left WalMart, I needed a shower just as much as I do after making the dog food.

I made my first big round of dog food over the weekend. This time I did 23 days. My entire freezer is filled with baggies of dog food. I can’t even find my ice cube trays.

The first round I used deboned meat and ground all of it. This round I used chicken thighs with the bone in. I processed everything else and then cut up the chicken into chunks and added it to the mix. I was FREAKING out about how the dog was going to choke on a chicken bone and die, but as it turns out the vet/dog food expert/pet store owner/common sense was correct. Dogs are used to eating bone. Other than the disgusting crunching sounds, all is well.

In my next post, I’ll post the proportions and ingredients of what I’m using, as well as what I’m paying for it. If you want to start from the beginning, check out Part 1 and Part 2.