“Be nice to nerds. Chances are you’ll end up working for one.” -Bill Gates

David Gilday has built a Lego robot that uses a Droid phone to solve a Rubik’s Cube in less than 25 seconds. 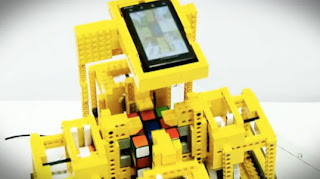 Just to prove what a jackass it is, the robot spins the Cube around in celebration when it’s done.