“I just read this great science fiction story. It’s about how machines take control of humans and turn them into zombie slaves! . . . HEY! What time is it?? My TV show is on!” –Bill Watterson

Someone (or someones) in Texas decided to get a little cheeky and change the writing on a traffic sign to warn of zombies! 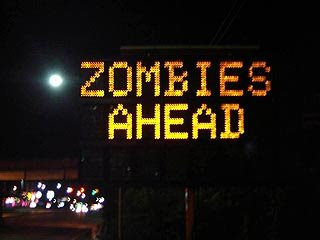 Chris Lippincott, director of media relations for the Texas Department of
Transportation, confirmed that a portable traffic sign at Lamar Boulevard and
West 15th Street, near the University of Texas at Austin, was hacked into during
the early hours of Jan. 19.

Lippincott told FOXNews.com that the sign is, “…sort of amusing, but not at all helpful.”

It would be fucking helpful if there were actually zombies, wouldn’t it Lippincott?